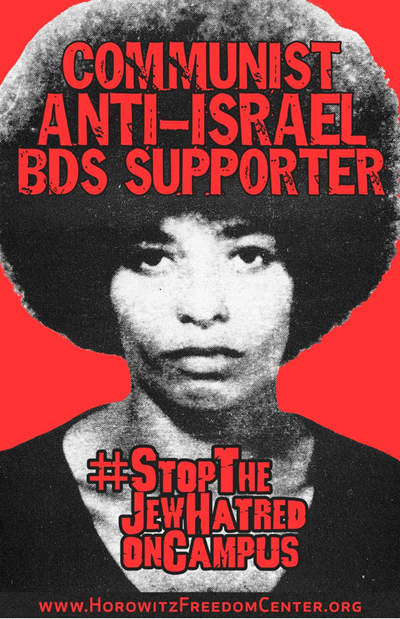 The David Horowitz Freedom Center has claimed credit for posters that appeared on five California campuses attacking the Boycott, Divestment and Sanctions (BDS) movement against Israel as a “Hamas-inspired genocidal campaign to destroy the world’s only Jewish state.” Images of the posters which appeared on the campuses of UC-Santa Barbara, San Diego State University, UC-Santa Cruz, UCLA and UC-Berkeley over the last week appear below.

Several versions of the posters were hung on these campuses late at night as part of a guerilla campaign to draw attention to the problem of Jew hatred at American colleges and universities. In addition to defining the BDS movement as a genocidal campaign to wipe out Israel, the posters name a number of prominent BDS activists on each campus, stating at UC-Santa Barbara for example: “The following students and faculty at UC Santa Barbara have allied themselves with Palestinian terrorists to perpetrate BDS and Jew Hatred on this campus.”

A second poster displays a photo of armed Palestinian militants with the caption “BDS: The Final Solution to the Israel Problem,” while a third features an enlarged photo of retired UC-Santa Cruz professor Angela Davis who is known for her anti-Israel activism emblazoned with the words “Communist Anti-Israel BDS Supporter.”

All three posters contain the hashtag #StoptheJewHatredonCampus, a reference to the Freedom Center’s campaign and website of the same name, and also include a link to the HorowitzFreedomCenter.org website.

The posters are part of a larger Freedom Center campaign titled Stop the Jew Hatred on Campus which seeks to confront the agents of campus anti-Semitism and refute the genocidal lies about the Jewish state spread by Palestinian terrorists and their campus allies. These lies include the claims that Israel occupies Palestinian land and that Israel is an apartheid state. These lies and rebuttals to them may be found on the campaign website,www.StoptheJewHatredonCampus.org.

“Virtually every major university campus in America is host to student organizations dedicated to spreading the propaganda lies of Hamas designed to weaken and delegitimize the Israeli state, and promoting Hamas campaigns like Boycott, Divestment and Sanctions (BDS) whose goal is its destruction,” explained David Horowitz. “Our goal in placing these posters on prominent campuses across America is to expose the true motivations of these groups who have chosen to ally themselves with terrorists and to challenge the lies which underpin their genocidal propaganda.”

“Any other group that preached hatred of ethnic groups or supported barbaric terrorists who slaughter men, women and children as part of a demented mission to cleanse the earth of infidels would be immediately shunted off campus and denied all university privileges and funding,” continued Horowitz. “Yet these student organizations whose sole purpose is to slander the Jewish state and its defenders are richly rewarded by campus administrators.”

The names of the campus BDS supporters named in the posters were found on the Canary Mission database. The Canary Mission is an organization created to “document the people and groups that are promoting hatred of the USA, Israel and Jews on college campuses in North America.”

Check out latest Promo codes available for big brands like Doordash at https://coupons.articlesteller.com/